Visiting Black Jack Battlefield was just step one of my jump into the history of the Bleeding Kansas era. While in Lawrence, thanks to the help of the Lawrence Convention & Visitors Bureau, I was put up in The Eldridge Hotel in downtown Lawrence.

The first hotel on the site of the current Eldridge Hotel was called the Free State Hotel, a very politically charged name for the 1850s. Built in 1855 by settlers from the New England Emigrant Aid Society, the hotel stood for just a year before Sheriff Sam Jones and a pro-slavery group burned it down.

Colonel Eldridge rebuilt the hotel, including an additional floor, and said that each time it was destroyed, he’d build it back with another floor. Sadly, he had to do just that after Quantrill’s raid in 1863 as much of the city, including the Free State Hotel, was burned.

Colonel Eldridge stayed true to his word and rebuilt the hotel, and it was renamed The Hotel Eldridge. From the 1860s, the hotel has gone through some changes. Torn down and rebuilt to reflect its former glory in 1925, it was then closed as  a hotel on July 1, 1970, and it was converted to apartments.

In the 1980s, a multi-million dollar transformation turned it back into a hotel, and another influx of money and work in 2005 restored the hotel back to its “original 1925 grandeur.”

The Eldridge is all about service and style. All the rooms are suites with a separate sitting area, mini-refrigerator, flat screen TVs, and free WiFi! That’s right – a higher end hotel that doesn’t charge an extra fee for WiFi – harder to come by than you might think.

While its definitely a 3+ star hotel, it’s not stuffy or unapproachable. The lobby furniture is comfortable, and the staff are friendly and helpful. Best of all, or at least for me, it has real character. Thanks to its history and design, its a unique spot and you won’t wake up and not know where you are, like in some chain hotels. 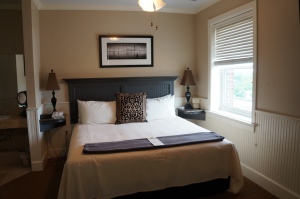 The hotel knows that since it’s downtown in a college town, there’s likely to be noise on weekends, so earplugs can be found by the beds. I found it quiet, but I was also there over the summer on a weekday.

Other nice details include the super comfortable mattresses, unquestionably clean linens (hoteliers – always go for white on white bed linens – guests know immediately that they’re clean), and it’s easy to walk just about anywhere in downtown Lawrence. Though, this does mean parking comes at a price – valet parking is $10.

Why have just one restaurant when you can have two? The Jayhawker is the more casual of the two with a 4:00-6:30pm Happy Hour during the week and drinks specials throughout the week. The bar off the lobby fills with natural light from the large windows, and the menu features local brews along with specialty cocktails and wines. For a full dinner (or breakfast or lunch), there’s TEN, on the other side of the lobby with a fancier vibe and what seemed like an older crowd than The Jayhawker.

With so much history, for those who believe in ghosts and spirits, it makes sense that the hotel would be haunted. It’s a stop for the Ghost Tours of Kansas, since the spirit of Colonel Eldridge still wanders the halls. He didn’t die there, but apparently just loved it so much, he never left. The most haunted spot in the hotel is reportedly the 5th floor, specifically room 506 where an original cornerstone allows ghosts to move between our world and theirs. Who knows?

Believers may experience unexplained events and feel let down without them. While I had no otherworldly sightings, I was able to easily check out downtown Lawrence and get a great night’s sleep, so I was happy!