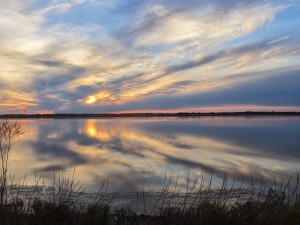 From around Valentine’s Day to April Fool’s Day – the cranes come through Quivira National Wildlife Refuge.

Recent sightings at the refuge have included sandhill cranes in the thousands on the west side of Big Salt Marsh.

Kansas is a part of the “central flyway” – a migratory route for a variety of birds between Canada and Central America and the marshes and wetlands of Quivira National Wildlife Refuge provide an ideal resting and refueling spot.

Sandhill cranes are passing through Kansas on their way north to breed from their southern wintering locales.  The birds, which can be 3-4 feet tall, gather in large groups during migration — strength in numbers.

At night, the waters and marshes are an ideal resting spot as any predator coming upon them will disturb the water, notifying the cranes that danger is near.

They can be noisy birds with distinct calls — rattling bugling type sounds that can be heard up to a mile away. Click to listen to them here.

They mate for life, which can be 20 years. Mate selection happens after courtship in the form of dancing — leaping, bobbing their heads, displaying their wings. One example is a male will fling a piece of grass or vegetation into the air as if to say “Look at me, choose me, I can build a good nest.”

They also have distinct “displays” and you can tell from their body language what they’re trying to say. Bowing, stretching their necks, jumping – each display communicates something unique.

Stop by Quivira National Wildlife Refuge — the Big Salt Marsh is one of the best places to see the cranes. It’s open daily from 1.5 hours before sunrise to 1.5 hours after sunset.