It’s that time again, time to vote for your favorite Kansas trail destination.  The inaugural winner of the award was Iola. Whichever location gets the most votes will be honored as our Top Trail Destination of the Year 2018, and we’ll be sending a free copy of our book to the winning town’s public library

We selected our finalists based on their plans to expand trails as well as their commitment to building and maintaining trails in the Sunflower State. Here’s a bit about them. 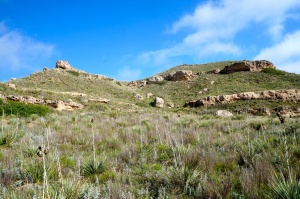 Scott City / Little Jerusalem.  In addition to serving as the gateway to the outstanding trail system at Lake Scott State Park, Scott City will be the destination for travelers heading to explore the newly opened Little Jerusalum area.

Later this year, there will be trails open and available at the well-known, but not previously (legally) accessible chalk formations. Having a maintained trail system there is designed to help protect the area and the formations themselves.

Marysville. The Oregon Trail crossed near Marysville and more recently the Blue River Rail Trail (with the beautiful covered bridges) has expanded north to the Nebraska state line through the diligent work of Marshall County Connection.

The next step is working to extend the rail-trail south further into Marysville to increase accessibility.

Wyandotte County. The county has started its 20/20/20 movement — Expanding bike routes, trails, and safe sidewalks, 20 miles of each (if not more) by 2020. They also have a both hiking and equestrian trails already in place at Wyandotte County Lake.

Vote for your favorite destination! If it’s not in the list, let us know in the comments below.