July 20, 1969 was the day that a man first walked on the moon. 50 years later, the Cosmosphere in Hutchinson is going all out this summer for the 50th anniversary of the moon landing.

This includes showing the APOLLO 11: First Steps Edition film, watch the trailer below, an Apollo 11 scavenger hunt, a selfie station, and perhaps coolest of all — an authentic Apollo-era Mission Control back room console in the Our Universe Gallery. Designed and built by the Cosmosphere, this exhibit was funded by the NASA TEAM II Grant.

For anniversary week, there are loads of special events with more details here. Presentation and book signing by Rick Houston, author of the book Go, Flight! The Unsung Heroes of Mission Control on Monday.

Tuesday is the world record attempt for most rockets launched in a day, an initiative by the U.S. Space and Rocket Center, and in the evening, a free presentation on what it was like to be one of the 600 million people watching footage on the moon landing.

Opera Kansas will perform moon-themed songs in the Grand Lobby from 10:30 to 11am on Thursday.

And on the anniversary day itself, Saturday, July 20, at the Cosmosphere, there will be a screening of the Smithsonian documentary The Day We Walked on the Moon, 11:00 am, 1:00 and 3:00 pm docent led tours that are Apollo 11 and Apollo-era focused. 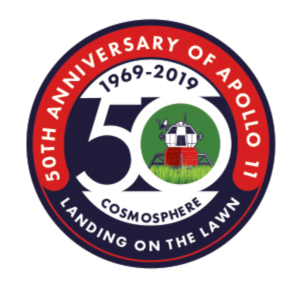 From 6 to 11:30pm on the Hutchinson Community College Lawn there will be a free “Landing on the Lawn” event with hands-on space themed activities, 1969 original moon landing footage, a screening of the Smithsonian documentary after dark.

The grand finale will be moon and planet observations through a giant 16” diameter telescope, led by Cosmosphere Space Science Educators. Learn more about the event here.

The Cosmosphere is a space museum with over 13,000 spaceflight artifacts, the world’s largest combined US and Russian collection of artifacts. It has the Apollo 13 command module, the Liberty Bell 7, the Gemini 10 space capsule, the backup of the Russian Sputnik 1, moon rock from the Apollo 11 mission, and much, much more.