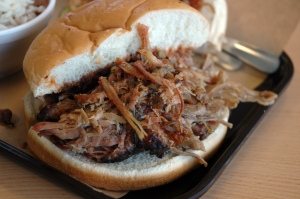 The birthplace of Kansas City was near 18th and Vine on the Missouri side of the state, but Kansas boasts some great barbecue options in the barbecue city. The original Oklahoma Joe’s is rather unexpectedly located in a gas station, but don’t be put off. It was opened by Jeff Stehney and his wife in 1996 after their barbecue competition team, Slaugherhouse Five, had won hundreds of awards, and it will have lines out the door for lunch.

But the line is worth it, and one of their most popular dishes, and one that’s won a lot of their awards, is their pulled pork. I’m partial to the brisket, but really, you can’t go wrong with just about anything on the menu. It’s quite literally finger-licking good, and if you spend some time on the nearby trails in Kansas City, you won’t have to feel guilty about digging into the overwhelmingly delicious (though not really all that healthy) lunch.