“The story of Brown v. Board of Education, which ended legal segregation in public schools, is one of hope and courage.”

2014 marks the 60th year since the monumental case – Brown v Board of Education. The United States Supreme Court ruled that it was unconstitutional for states to have schools segregated by race.

It started in Topeka, Kansas in 1951 when 13 parents sued the Topeka Board of Education, calling for the desegregation of the schools. Led by Oliver Brown, whose daughter had to ride the bus to the closest school for African-Americans, because the closest school, seven blocks away, was reserved only for whites. The District Court ruled in favor of the Board of Education, but eventually in 1954, combined with other cases around the same issue, the Supreme Court ruled that even if segregated schools were “equal,” it was unconstitutional to separate them. So this landmark case that changed history had its roots in Kansas. 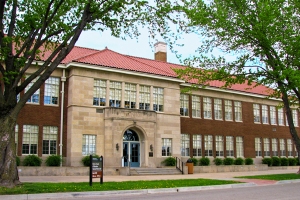 This national historic site is free to visit, and it is in the location of the former all black Monroe school. Inside is a series of exhibits on the history of racism, segregation, education, and justice in the state and the country.

Outside, you can play on the historic playground, have lunch on the picnic tables, or even set out on the Landon Nature Trail, which starts in the parking lot, and which is a featured trail in our upcoming book.

In honor of the 60th anniversary, there are several events coming up that you can take part in. The first one is this Saturday from 10am to 1pm. It is a free living history walk. Every 30 minutes from the Historic Ritchie House to the Brown v Board of Education historical site. Along the way will be living history reenactors who will tell stories of life in Kansas from the 1850s through the 1950s.

More events include a free block party on May 2, a free screening of the film Freedom Riders on May 8, and a Twitter reenactment on May 17 and May 18. Find out more here.